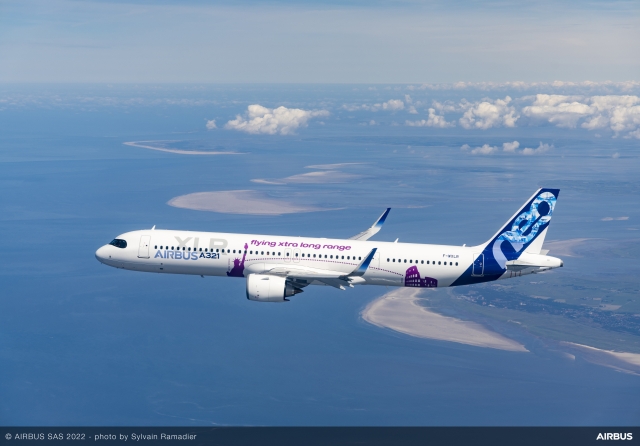 The first prototype (msn 11000) took off from Hamburg-Finkenwerder at 11:05 hrs LT, and returned after a flight of 4 hours and 35 minutes. During this maiden flight, the aircraft’s flight controls and its CFM International Leap 1A engines were tested, as well as its flight envelope protections at high and low speeds.

The A321XLR will serve routes of up to 8,700km, 15% more than that of the A321-200NX (a version marketed as A321LR) which is equipped with additional fuel tanks and 97 tonnes maximum take-off weight (MTOW). To achieve this range, the changes on the A321XLR - compared to other version of the A321neo - include a new 12,900 litre permanent Rear Centre Tank (RCT) for more fuel, a modified and strengthened landing gear, a higher MTOW of 101 tonnes and an optimised single slotted wing-trailing-edge inboard flap configuration to preserve the same take-off performance and engine thrust requirements of other A321neo versions. The necessary structural enhancements for the higher MTOW of the A321XLR required a new aircraft type certificate and therefore it is officially designated as the A321-200NY.

At the moment of the first flight, Airbus has orders for 460 A321-200XLRs. The biggest customers are American Airlines and United Airlines, each with fifty A321-200XLRs on order.