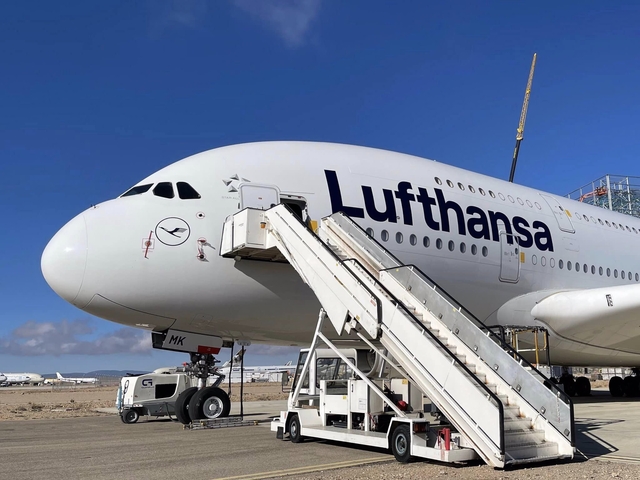 Lufthansa brings back 1st Airbus A380

Following-up on our article of 28 June 2022, we can now report that Lufthansa has taken a first Airbus A380 out of storage. The aircraft, D-AIMK (146), was ferried from Teruel in Spain to Frankfurt on 2 December 2022. Here it will receive first maintenance before being ferried to Manila for heavy maintenance. It's planned to have the aircraft back in service at the start of the 2023 summer season in March.

The ferry-flight was conducted with its gear down as Lufthansa couldn't test if the gear would retract as normal at Teruel.

Lufthansa is reactivating the type as it's facing a big increase in post-Covid customer demand and its new Boeing B777-9s are delayed. The airline has eight remaining A380s in the fleet and it's expected that up to six will be reactivated. The plan is to operate the aircraft mainly out of Munich.

Email ThisBlogThis!Share to TwitterShare to FacebookShare to Pinterest
Labels: A380, AIRBUS A380, D-AIMK, FRANKFURT, LUFTHANSA BRINGS BACK FIRST AIRBUS A380, LUFTHANSA RETURNS A380 TO SERVICE, TERUEL 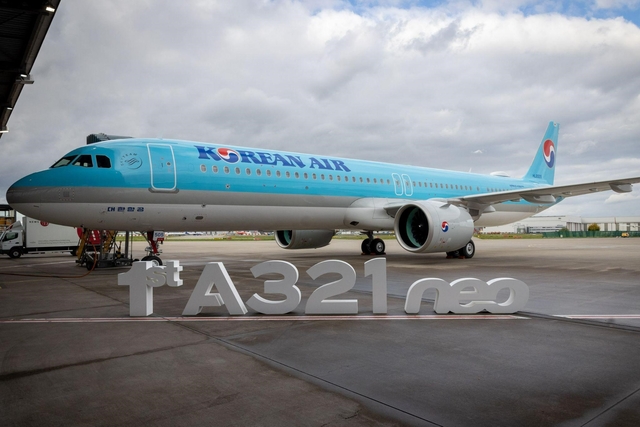 On 30 November 2022, Korean Air officially celebrated the entry into commercial of its newest aircraft type, the Airbus A321neo. The aircraft in question, A321-200NX HL8505 (10977) had already arrived in South Korea on 27 October 2022 when it was delivered from Hamburg-Finkenwerder to Seoul-Gimpo with a stop at Tashkent. Since then the Airbus has been used for crew-training flights, mainly between Seoul-Gimpo and Seoul-Incheon and Seoul-Gimpo to Jeju.

Korean Air has a total of 30 A321neos on order, with options on another twenty. It plans to deploy the aircraft on domestic and intra-Asian flights. Earlier this year, the airline also took delivery of its first of 30 Boeing B737-8s.

Toulouse, 29 November 2022 – Croatia Airlines, Croatia’s national flag carrier based in Zagreb, has signed a firm order for six A220-300 aircraft. Croatia Airlines plans to lease an additional nine A220s, taking its total commitment for the type to 15.

The A220s will replace previous generation aircraft in the company's fleet, reducing operating costs as well as improving environmental efficiency and competitiveness while offering passengers unrivaled comfort throughout its fleet.

“We are thrilled to add Croatia Airlines as a new A220 customer. The A220 is ideally suited to Croatia's aviation needs, providing operational flexibility and efficiency allowing its airline to pursue its ambition for both regional and international connectivity without compromising on any aspect, be it passenger comfort or trip and seat cost economics,” said Christian Scherer, Airbus Chief Commercial Officer and Head of International.

The A220 is a clean sheet design and the only aircraft purpose-built for the 100 to 150-seat market segment bringing together state-of-the-art aerodynamics, advanced materials and Pratt & Whitney’s latest generation GTF™ engines. The A220 delivers a 50% reduced noise footprint, up to 25% lower fuel burn per seat and CO2 emissions - compared to previous generation aircraft, as well as around 50% lower NOx emissions than industry standards.

Airbus and Croatia Airlines have had a long-standing partnership starting 25 years ago, when the airline first became an Airbus operator. Today, the Croatian carrier operates an Airbus fleet of seven single-aisle aircraft from the A320 Family (five A319s and two A320s).

With currently more than 230 A220s delivered to 16 airlines operating on four continents, the A220 is the optimal aircraft for regional as well as long-distance routes and will enable Croatia Airlines to further contribute to the development of tourism in the region, while providing flexibility to right-size their operations.

To date, more than 70 million passengers have enjoyed the A220. The fleet is currently flying on over 800 routes and 325 destinations worldwide. As of the end of October 2022, around 30 customers have ordered 780+ A220 aircraft - confirming its breakthrough on the small single-aisle market.

In a statement dated November 22, 2022, the JAL Group said three of the aircraft had been delivered with the fourth due in February 2023. The conversion process is scheduled to begin in March 2023 at the Elbe Flugzeugwerke GmbH (EFW) facility in Singapore.

Yamato handles around 1.8 billion parcels annually and services the entirety of Japan. The four freighters will wear Yamato livery. The JAL Group says the decision to use Spring as the operating airline, rather than Jetstar Japan (GK, Tokyo Narita), will optimize management resources and strengthen the low-cost carrier's business model. The four routes, which will run 21x daily, are:

Yamato advises the maximum payload on each aircraft will be 28 tonnes. The main deck of each plane will accommodate 14 AAY containers and the lower deck will accommodate ten AKH containers. The joint venture remains subject to application and approval from the relevant authorities. 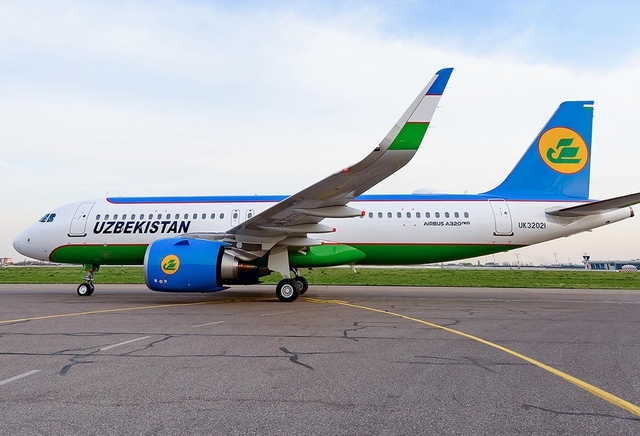 On 21 and 22 November, the President of Uzbekistan conducted a state-visit to France. During this visit both countries signed various trade-deals, including an additional order for Airbuses for Uzbekistan Airways. In total, the airline has secured orders for eight A320neos and four A321neos.

On Thursday, November 17th, Virgin Atlantic's A330neo fleet got a little bit bigger with the arrival of its 2nd A330-900. The aircraft made its way from Airbus facilities in Toulouse to Virgin's London Heathrow hub and brings the airline's total fleet count to 38.

Taking off at 16:36 local time on November 17th, the A330-900 registered G-VTOM is the second of its kind delivered to Virgin Atlantic. With a flight time of one hour and 24 minutes, the jet touched down at London Heathrow at 17:00 local time.

According to AIB Family Flights, the new aircraft was first spotted conducting an engine run and taxi check on September 12th, 2022, and had a total of six test flights before its delivery flight to Heathrow. In total, the airframe with MSN 2019 accumulated nearly 13 hours of test-flight time across its six flights.

Where is Virgin's first A330neo flying?

We only need to look at where the airline's first A330neo is flying to get a sense of Space Oddity's future destinations. So, if we look up the flight history of G-VJAZ (nickname "Billie Holiday), we can see that the A330-900 has flown from its London home to Boston and Tampa in the United States.

The London-Boston service has flight numbers VS11/VS12, while the airline's Tampa service is VS129/VS130. Since launching its Tampa service on November 3rd, 2022, the airline has predominantly deployed the A330-300 on the route, with a single A350-1000 flight and several A330-900 flights thrown in. Interestingly, since its first revenue flight on October 27th, the A330neo has only flown to the two cities.

The newest type to join the airline, Virgin has invested time and energy to make sure its A330neos offer a unique and special experience to all who board. Passengers in all classes will find Bluetooth-enabled entertainment systems and the airline's "fastest ever WiFi." Meanwhile, Premium and Upper Class guests will find that their seats are also fitted with wireless charging.

The A330-900's Upper Class cabin also has two extra-spacious suites. Referred to as "The Retreat Suite," this product allows passengers to enjoy an "intimate dinner together in their own private social space."

Airbus Beluga Gets Stuck In The Mud In France

An Airbus BelugaXL suffered an incident in France after taxiing off the runway and getting stuck in the mud. The giant aircraft remains in its position at the time of publication. Let's take a closer look at this incident below.

One of Airbus' mammoth A330-700L planes, popularly known as the Airbus BelugaXL, has become stuck off the runway at Albert Picardie Airport (BYF) in France. The huge cargo plane was in the process of backtracking after landing, but things took a turn for the worse when the Beluga's nose gear came off the runway.

Images of the aircraft show its nose gear covered in mud as emergency services scramble to get the plane unstuck. Given the sheer size of the plane at over 63 meters long, they are understandably having difficulty in removing the plane from its predicament.

According to AvHerald, the plane is still stuck in the mud at the time of publication, adding that after landing, the plane "rolled to the end, turned into the turn pad to begin the 180 degrees turn for backtracking, and completed about 135 degrees of the turn but then became disabled with the nose gear off the paved surface in the grass."

The Airbus BelugaXL (registration: F-GXLN) was operating flight BG-127N from Saint-Nazaire Montoir Airport (SNR) to Albert Picardie Airport and had landed successfully at 12:47 on runway 27. For those seeking to understand how and why this incident occurred, take a closer look at our detailed article on why runway excursions happen and how they can be prevented.

F-GXLN is an Airbus A330-700L that only entered service this summer. The plane is one of six BelugaXL aircraft built by Airbus and took its first flight in July before entering active duty in September.

The BelugaXL offers 30% more capacity than the BelugaST (Super Transporter) and has a massive maximum takeoff weight (MTOW0 of 227,000kg, making it one of the largest planes ever made. The BelugaXL will eventually replace Airbus' older BelugaST aircraft, which are set to be phased out of service in the coming years.

With the Airbus Beluga still stuck in its position after the runway excursion, Albert Picardie Airport's runway has been closed. BYF is a public airport with a runway large enough to accommodate the giant Beluga plane and is often used by Airbus to transport materials from its nearby facility at Meaulte.