Etihad Airways (EY, Abu Dhabi Int'l) remains committed to the further operation of its A380-800 quadjets and does not want to cancel its forthcoming A350-1000s, a spokesperson told the Executive Traveller.
Reuters had earlier reported, citing unnamed sources, that the carrier was contemplating permanently grounding all ten A380-800s. The airline said that the type remained "an important part of the Etihad fleet and [was] well suited to a number of key routes".
According to the ch-aviation schedules module, Etihad deploys its A380s from Abu Dhabi Int'l to London Heathrow, New York JFK, Paris CDG, Seoul Incheon, and Sydney Kingsford Smith. The ten aircraft have been in storage since March 25.
Etihad's local rival Emirates (EK, Dubai Int'l) recently underlined that it also intends to resume full utilisation of its A380-800s as of 2022.
The Emirati flag carrier has also pledged to take deliveries of its A350-1000s. The airline has 20 of the type on firm order from Airbus, of which four have already been formally delivered, although they remain at Bordeaux airport with French registrations.
"Etihad is also committed to the delivery of its future fleet of Airbus A350-1000s and has selected the routes to be operated by this aircraft," the spokesperson said.
The airline has yet to file schedules for the A350s. As such, the selection of routes has yet to be made public.

Posted by Airbus Deliveries at 10:28 No comments:

Wizz Air (W6, Budapest) took delivery of its first 186-seat A320-200neo, HA-LJA (msn 9586), on May 29, 2020, and deployed the aircraft into revenue service on May 30 between Budapest and London Luton. Since then, it has been flying on a variety of European routes from the Hungarian capital.
According to the ch-aviation fleets advanced module, Wizz Air has a further sixty-four A320neo on firm order from Airbus. The Hungarian low-cost carrier operates sixty-nine A320-200s, thirty-four A321-200s, and eight A321-200neo, while its subsidiary Wizz Air UK (W9, London Luton) operates three A320s and seven A321s. Besides the A320neo, the airline also has 203 A321neo on order, including twenty A321neo(XLR)s.
"We have maintained our commitment to taking deliveries of our order book with Airbus. I think we must be probably the only airline, but certainly one of the very few on the planet that continues to honour the contractual commitment with Airbus. We do it because we have been saying that the following market consolidation will spring significant opportunities for Wizz Air, and we have already acted on some of those," Chief Executive József Váradi said during an investor call.
Meanwhile, the carrier disclosed its revised fleeting plan in its annual report, signalling a slight slow-down in growth and changes in delivery and retirement dates.
Wizz Air Holdings now plans to operate 131 aircraft at the end of March 2021 across all of its AOCs, down from 134 in the previous plan, deferring deliveries of one A320neo and two A321neo. At the end of March 2022, it plans to operate 150 aircraft compared to the previously anticipated 163. It intends to have 22 fewer A321neo than in its original strategy but will instead take seven more A320neo while retiring two less A320-200s than planned.
Wizz Air wants to reach 295 aircraft by the end of March 2027, as previously planned, although the target composition of the fleet has changed with five A320neo replaced by A321neo.
The carrier continues to work on the launch of its newest subsidiary Wizz Air Abu Dhabi (Abu Dhabi Int'l).
"Before the end of June, we are planning on launching the airline commercially. We would still expect the airline to become operational sometime in October. And as a matter of fact, we have been upping our game in Abu Dhabi, increasing the initial fleet size from three aircraft to six aircraft in the first six months," Váradi said.
He added that Wizz Air Abu Dhabi plans to grow to 50 aircraft over the next 10 years. In a webinar during the virtual edition of the Arabian Travel Market, he said that within the next 15 years, the airline could have up to 100 aircraft serving the wider Gulf area.
"You should be looking at our platform, not necessarily just Abu Dhabi, we want to serve the UAE and possibly the broader GCC markets," Váradi said.

Posted by Airbus Deliveries at 10:12 No comments:

IndiGo Airlines (6E, Delhi Int'l) is planning to phase-out its 122 remaining A320-200s shortly, possibly accelerating their retirement, as it seeks to use the COVID-19 pandemic to push towards a more efficient, all neo narrowbody fleet.
"We see an opportunity here to make the fleet more efficient. Particularly with the old classic ceos, which incur maintenance costs, which you know have been a real problem for us all through the year. We're going to return them as rapidly as possible and therefore reduce our maintenance costs," Chief Executive Ronojoy Dutta said during the carrier's quarterly investor call.
According to the ch-aviation fleets ownership module, all of IndiGo Airlines' A320-200s are dry-leased. Dutta underlined that the LCC has relatively short-term lease contracts and was due to return most of the aircraft in the coming years anyway. In the case of high demand, it could evaluate extending the leases, but in the current downturn, this will surely not happen.
Dutta underlined that the airline will seek to avoid any confrontation with the lessors and will not push for early termination of leases, choosing instead to return the aircraft as scheduled. The airline has been retiring A320s over the past months, having phased out eight units since the end of March 2019.
"We will return them in their scheduled time, and if we have mutually agreed upon it, we may do it a little faster," he said.
For the time being, the airline will use the A320-200s only "when necessary" with the bulk of its reduced schedule flown on A320-200neo and A321-200neo narrowbodies.
Dutta added that IndiGo Airlines would not stop taking deliveries of new A320neo Family aircraft. The airline already operates 100 A320neo and thirteen A321neo, and has a further 230 and 383 units of the respective types on firm order from Airbus, the ch-aviation fleets advanced module shows. IndiGo Airlines also operates twenty-five ATR72-600s.

Posted by Airbus Deliveries at 10:01 No comments:

Posted by Airbus Deliveries at 14:02 No comments:

Posted by Airbus Deliveries at 13:59 No comments:

FIRST AIRBUS A220 ASSEMBLED IN MOBILE TAKES TO THE SKIES


MOBILE, ALABAMA, US - The first Airbus A220 jet assembled at the Mobile plant in Alabama carried its maiden flight on 2 June. The aircraft is destined for the U.S. carrier Delta Air Lines. The flight marks a remarkable milestone for Airbus. The European planemaker has begun to assemble A220s in the U.S. in 2019. Airbus also assembles A320 family jets in Mobile. Airbus acquired the majority stake in Bombardier's A220 program in 2018. The program, which was known as Bombardier CSeries, ran into some marketing problems due to the tariffs imposed by the US authorities. Boeing had filed a complaint about Bombardier claiming unfair government subsidies. Bombardier and Airbus finalized the sale of the program in July 2018.
The Mobile plant was first established by Airbus  to bypass US tariffs on A220 imports, but the tariff was lifted by a higher American court in 2018. JetBlue is another American carrier that expects to receive A220 jets assembled in Alabama. The airline has 70 A220-300 variants on order from Airbus. Delta is the only Airbus A220 operator in the United States with 31 A220-100s in Service. The carrier will take delivery of 64 A220s more over time, including 14 A220-100s and 50 A220-300s.
Posted by Airbus Deliveries at 16:46 No comments:

Email ThisBlogThis!Share to TwitterShare to FacebookShare to Pinterest
Labels: A220, AIRBUS A220, AIRBUS MOBILE ALABAMA, DELTA AIRLINES, FIRST AIRBUS A220 ASSEMBLED IN MOBILE TAKES TO THE SKIES, MOBILE

Japan Airlines (1) JA06XJ
Posted by Airbus Deliveries at 17:41 No comments: 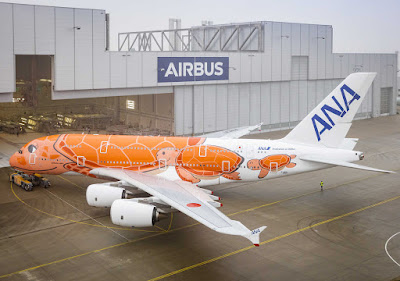 Toulouse, France - The Japanese carrier All Nippon Airways (ANA) pushed back the delivery of its third Airbus A380 aircraft due to the ongoing global crisis.

ANA had ordered three Airbus A380s. All of them are finished and two of them already joined the long-haul fleet of All Nippon Airways.

On Marck 27, ANA's third A380 took off from the Airbus facilities in Hamburg-Finkenwerder for a test flight of almost one and a half hours.

ANA planned to receive the third A380 in April, with commercial flights due to begin in May. But the airline has suspended the connection to Hawaii, part of its decision to cut 85% of international flights in response to the COVID-19 outbreak.

"The Japanese airline industry as a whole could lose about 2 trillion yen ($18.6 billion) in revenue,"

Likened to a flying hotel, the 520-seat A380 doubles the carrying capacity of ANA's existing jets. ANA aims to use the three double-decker planes to cut into rival Japan Airlines' high market share in flights to Hawaii.
Posted by Airbus Deliveries at 19:43 No comments:

SAS to Push Back Delivery of Airbus A320neos 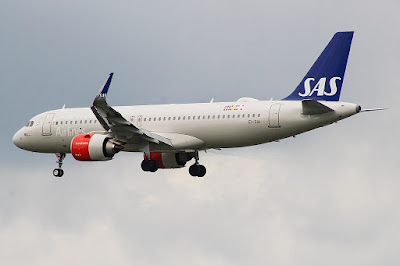 The announcement came during the presentation of the airline's quarterly figures. According to the agreement, the delivery of the A320neo jets was pushed back to 2024 from 2022.

“We continue our discussion on additional solutions,”

SAS has also accelerated the retirement of older aircraft to shrink the fleet size in a lower-demand environment for air travel.

“We might be able to reach a one-type fleet faster than previously anticipated before the crisis,”

The Scandinavian operator already decided to phase out its remaining Boeing 737s and older A320-family in an effort to become an all-Airbus operator.

The airline is currently operating A320neos on domestic routes in Norway and Sweden. They will also be deployed on selected European routes, while long-haul flights will “primarily” be operated with A330s and A350.
Posted by Airbus Deliveries at 19:37 No comments:

Posted by Airbus Deliveries at 19:30 No comments: