Posted by Airbus Deliveries at 11:48 No comments:

Posted by Airbus Deliveries at 11:45 No comments:

Posted by Airbus Deliveries at 11:41 No comments:

Toulouse, Aeroflot – Russian flag carrier Aeroflot took delivery of its first Airbus A350-900. With this delivery, Aeroflot became the launch operator of the type in Eastern Europe and the CIS region.
The Russian operator has a total of 22 A350-900 aircraft on order and operates an Airbus fleet of 126 aircraft, including 107 A320 Family jets and 19 A330 Family jets.
Airbus A350-900 has a spacious three-class cabin layout with 316 seats: 28 private Business Class suites with full-flat seats, 24 Comfort Class with extra legroom and 264 Economy Class featuring the latest-generation Panasonic eX3 in-flight entertainment system, HD screens, and Wi-Fi connectivity to ensure an enhanced experience for all passengers on long-haul flights.
Aeroflot will deploy its A350-900s on routes between Moscow and London, Dubai, New York, Miami, Osaka, and Beijing. The A350 XWB has a flight range of 9,700 NM. Its Airspace by Airbus cabin design offers passengers and crews a quiet and comfortable flying experience.
Thanks to its aerodynamic design, carbon fiber fuselage, wings, and latest technology Rolls-Royce Trent XWB engines, the aircraft consumes 25% less fuel compared with previous-generation Widebody jets.
As of the end of January 2020, the A350 XWB Family jets received 935 firm orders from 50 operators across the world.
Posted by Airbus Deliveries at 11:36 No comments:

Tigerair Australia (TT, Melbourne Tullamarine) will retire all remaining A320-200s by October 2020 and transition to an all-B737-800 fleet going forward, parent Virgin Australia Holdings announced in its half-yearly earnings report.
"I'm pleased we can accelerate the transition of Tigerair to an all B737 fleet which will help get the business into a better financial position moving forward," Chief Executive Paul Scurrah said.
The low-cost carrier currently operates nine A320-200s and six B737-800s, the ch-aviation fleets advanced module shows. Out of the A320s, two were already scheduled for phase-out this year. The new plan also foresees the other seven aircraft being retired by October 2020. In turn, Tigerair will receive an additional two B737-800s from sister carrier Virgin Australia (VA, Brisbane Int'l).
In addition to fleet transitioning and downsizing, Tigerair will also terminate five loss-making domestic routes. As of April 28-29, 2020, the airline will cease flying from Sydney Kingsford Smith to Adelaide, Coffs Harbour, and Cairns, from Melbourne Tullamarine to Coffs Harbour, and from Hobart Int'l to Coolangatta/Gold Coast.
"Short-term capacity reductions will be made on the Tasman in Q4FY20 [from April to June 2020] due to weakening demand attributable to coronavirus," the group added.
In total, Virgin Australia Group will reduce its total capacity for the period January-June 2020 by 3%. The holding estimates that the drop in demand caused by the COVID-19 epidemic will have a AUD50-75 million Australian dollar (USD33-49 million) impact on its financial results this fiscal year.
Scurrah also told Reuters that Virgin Australia Group was contemplating a new widebody order to transition to a single-type long-haul fleet. Currently, Virgin Australia operates six A330-200s and Virgin Australia International five B777-300(ER)s.
"We are doing an exploration at the moment. If the deal is worth doing, we absolutely want to do one this year, but it is too early to speculate," Scurrah said.
The group owns one A330-200 and four B777-300(ER)s, while the remainder of its widebody fleet is leased. Scurrah said that if Virgin Australia chooses to place a widebody order, it will target deliveries before the leases start expiring in 2024.

Posted by Airbus Deliveries at 11:23 No comments:

India's Directorate General of Civil Aviation (DGCA) has initiated an audit of all A319-100s operated by Air India (AI, Mumbai Int'l) after a passenger complained that a broken panel had obstructed an emergency exit on one of the aircraft, The Economic Times has reported.
"As an immediate corrective action, an engineering order to inspect and rectify the defect has been issued for compliance. As a preventive action, all Airbus 319 aircraft will be inspected to ensure the secured and correct installation of the panel during major checks," the flag carrier told the regulator.
The DGCA spotted the irregularity after a passenger tweeted an image of a panel blocking the emergency exit, potentially obstructing it in need of an evacuation.
According to the ch-aviation fleets advanced module, Air India currently operates twenty-two A319-100s, which are 11.7 years old on average.

Posted by Airbus Deliveries at 16:16 No comments:

Email ThisBlogThis!Share to TwitterShare to FacebookShare to Pinterest
Labels: A319, AIR INDIA, AIRBUS A319, INDIAS DGCA TO AUDIT AIR INDIA'S AIRBUS A319

AirAsia X (D7, Kuala Lumpur Int'l) has asked lessors to either waive or defer lease payments for its A330-300s due to the financial impact of the Covid-19 epidemic, Flightglobal has reported citing unnamed sources.
The carrier did not confirm the report but said that its exposure to the crisis is high as over 30% of its pre-epidemic capacity was to and from China.
According to the ch-aviation fleets advanced module, AirAsia X operates twenty-four A330-300s, of which twenty are leased from ICBC Financial Leasing, Avenue Capital Aircraft Holdings, BOC Aviation (three each), Aircastle, Asia Pacific Aviation Leasing Group, DAE Capital (two each), China Minsheng Investment Group, Macquarie AirFinance, Sierra Echo Aircraft Leasing, Seraph Aviation Management, and Stratos (one each).
Two unnamed lessors said that they were willing to discuss some relief to the long-haul low-cost carrier but were unlikely to accept lease rate waivers.

Posted by Airbus Deliveries at 16:11 No comments:

Kangerlussuaq, Greenland - Air Greenland is putting its only Airbus A330-200 for sale. The company is replacing the 21.5-year-old aircraft with a brand new A330-800.
The airline will receive its first A330neo at the end of 2021.
Air Greenland appointed Skytech-AIC for the sale of its PW4000-powered Airbus A330-200. The aircraft, which was manufactured in 1998 and has been in service with Air Greenland since 2002.
Skytech-AIC is a British aerospace company providing services to airlines and investors in aircraft finance, procurement, remarketing and fleet asset protection.
Posted by Airbus Deliveries at 18:15 No comments:


European authorities have certified the Airbus A321 passenger-to-freighter conversion undertaken by the airframer’s EFW joint venture with ST Engineering.
Approval of the supplementary type certificate by the European Union Aviation Safety Agency follows the maiden flight of the initial converted aircraft on 22 January. The aircraft is set to be delivered to Vallair.
ST Engineering had recently stated that it expected to secure certification for the P2F conversion by the end of the first quarter of 2020.
“The swift process in attaining EASA’s STC shortly after our first flight test is a testament to the engineering and design strengths of our P2F solution,” says ST Engineering aerospace president Lim Serh Ghee.
EFW chief Andreas Sperl says the A321P2F “complements” the passenger-to-freight modification it undertakes for the A330.
He says the two fully-containerised decks – with up to 14 positions on the main deck and 10 on the lower – will provide an “ideal replacement” for older converted Boeing 757s.
The aircraft is intended to transport up to 27.9t over a range of 2,300nm. 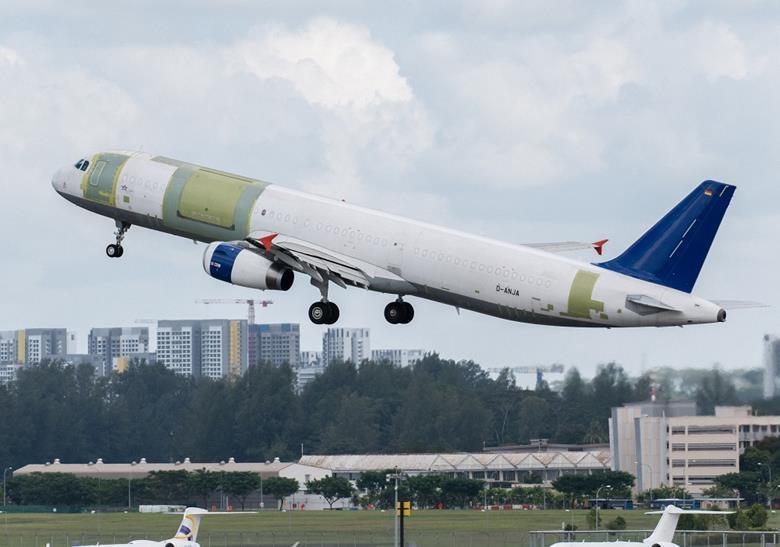 Source: ST Engineering
Vallair is the launch operator for the A321P2F modification
Airbus says it is “confident” that more operators will show interest in the newly-developed modification as the aircraft enters service.
Lease management firm BBAM signed a general terms agreement at the end of last year for “several” A321P2F conversions, says EFW. 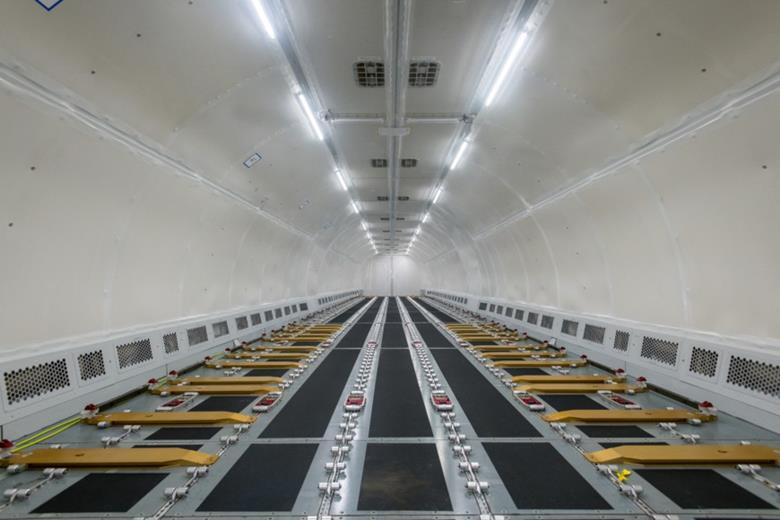 Source: EFW
The A321P2F maindeck cabin
Its first aircraft was inducted in January for modification in Singapore and conversion of a second will start in March.
ST Engineering leasing venture Keystone Holdings has also reached a letter of intent with Qantas for conversion and lease of an A321P2F for delivery at the end of 2021. 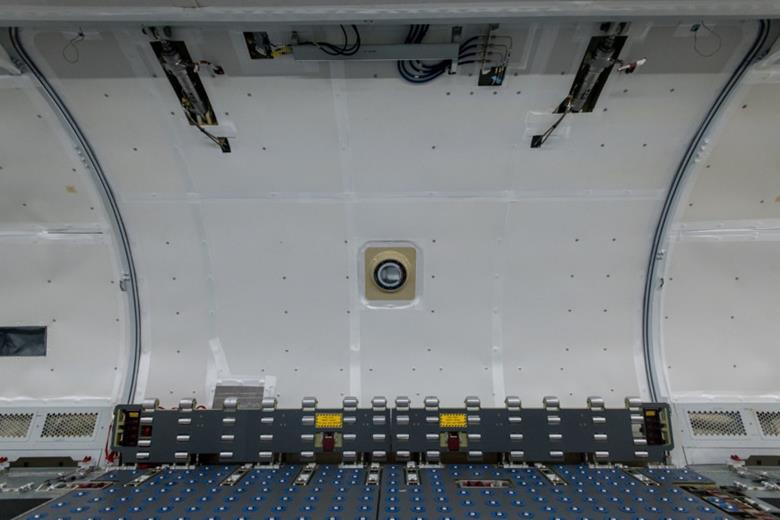 Source: EFW
The large maindeck cargo door installed on the port side
Airbus has forecast a market for some 1,000 conversions of small aircraft into freighters over the next two decades.

Posted by Airbus Deliveries at 15:35 No comments: